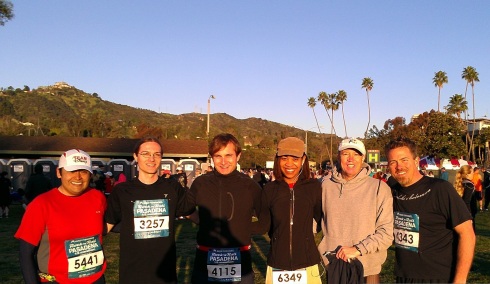 My running peeps and I had a blast at the Rock ‘n’ Roll Half Marathon in Pasadena. I made it to the Rose Bowl with plenty of time to spare before the race. After arrival I stayed in my car for warmth at least until the sun came up. I expected low temperatures for a mid-February early morning and as expected it was freezing out there! Not literally, but I’m not used to standing around in 40 degree weather. What I didn’t expect was to go from shivering to the runner’s high for the rest of the day.

Though my spirits were high my legs went on a hiatus  soon after the race started and continued for the next few days.

View of the starting line from my vantage point.

They felt fine for the first couple of miles. Each mile marker I passed encouraged me to take my power-walking skills to the next level in order to finish. Just past mile 3 I felt a pull at my right knee which made me acutely aware of every step I took to mile 4 and beyond. My IT band pain had made a reappearance around mile 5, but not finishing this race was not in my thoughts. I had plenty of motivation and was in good spirits, enjoying the rock bands that played and the supporters that cheered us on.

By mile 6 I wondered whether I could make my 2:30 goal time. By mile 7 the 2:30 pacer had passed me while I was walking. Though I wanted to catch up I stayed at my current speed. I understood that trying to keep up with that pacer meant I wouldn’t be running my own race at my own pace. If there’s one thing I’ve learned from running training it is that. Being surrounded by many others in a race environment you are really only ever racing against yourself.

By mile 9 (A.k.a. the part of the course with the lovely sugar bombs b.k.a. the gel stations) I couldn’t run more than about 5 steps before slowing  to a walk because of the pain. Even though running the rest of the way would mean I’d be finished sooner my leg was in no position to oblige. I finished at just over 2 hours and 46 minutes. Not terrible for 13.1 miles, but it was more than 15 minutes slower than I’d predicted. That said, it was a great course and I enjoyed my experience enough that I would do it again. Nothing says congratulations quite like a shiny medal, post-race snacks, and ice packs.

I am back to leaning toward doing more races this year. While I’m still in recovery mode I’ve signed up to volunteer at the LA Marathon next month. Who knows what I’ll end up registering for next?

Let’s do this: First rock ‘n’ roll half marathon

I am looking forward to the race tomorrow. I am not looking forward to getting up at zero dark thirty to get there by the recommended 5:45AM arrival time. If I want my eight hours of shut-eye, I have to go to sleep by 7:30PM. Not likely to happen tonight– or before any race day. If I did a race every month it might be different. This will be my first race in five months and my first half marathon in over a year, so the ‘waking up hourly in a panic that I’ve overslept’ thing is still alive and well. I will try not to trip and get trampled on — a real possibility since

4) There are bands playing. Seven of them (hooray)! I’m sure they won’t be distracting us from watching the road at all.

Fortunately, I think it’s a flat course. Live near the Rose Bowl or Caltech? Come cheer on the runners in this race benefitting Cure Mito! Are you one of the 10,000+ people signed up? Best of luck and see you at the finish line!