Growing and Cleaning: Must Be Spring

Over the last few months it appears that I took my A Mad Notepad tagline: A little less talk. A lot more doing, literally. It worked well for my productivity but I noticed that the blog hasn’t been the most active reading destination. so I want to take a moment to come up for air. That fresh Spring air with all the new plants, pretty flowers, pollen — *cough* *hack*– Pollen aside, I do like what the new season has brought so far.

I’ve made good progress on my professional writing venture started almost a year ago. I now have several pieces in the works. My most recent writing piece is now up on wodff.org as part of a plan to showcase a variety of LAFD supporters. I’d also like to submit a piece to a forthcoming NaNoWriMo anthology and perhaps explore cool web series opportunities like this. 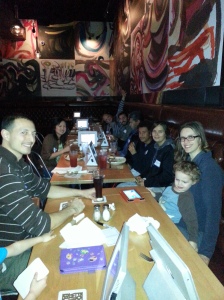 As a regular attendee I got promoted to dinner co-host late last year. My first action was to incorporate the South Bay into the location rotation of monthly L.A. Geek Dinners starting this year.

In January I hosted my first meal, at Stacked, in Torrance. It was a little nerve-racking at first, especially when learning how to order meals on the iPads placed at every table. Overall we had a good time and our tables saw a variety of delicious, highly-customized meals.

Next month we’re returning for more food and fun. Join us on April 8th, at 7pm, especially if you’re a geek (any type of geek!) in Carson, Lakewood, Redondo Beach, Harbor City, Torrance, Long Beach, Gardena. We’ll be all up in your backyard in 2015! Don’t be shy and come say hi.

I reduced my social media noise to better focus on what really matters to me online. With recent news of Google+ having numbered days– a network I’ve actively used since their beta– I’ve officially dumped a handful of sites (BYE Empire Avenue, Xanga, and FriendFeed) and started using others regularly like Ello, Vine, and Instagram. I have a lot of new things to share on the latter that is sure to excite the armchair foodie in you. Watch that space!

Have you deleted any of your disused social networks lately? 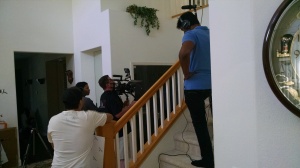 On set for TRIPLE TIMe Production.

I’m producing a sci-fi, short film about time travel called TRIPLE TIMe written and directed by Trevor Mayes. After a successful crowd-funding campaign earlier this month we’re currently in production (March 28 – April 12).  Though the shoot days are long it’s encouraging to see how dedicated everyone is to the project’s success. It’s has been a positive experience for me overall. I’ve learned a lot from launching a crowd-funding campaign (that could be another blog post if anyone’s interested) to being on set. I’ve gotten to work with some uber-talented craftspeople and actors. And that I was able to successfully navigate to the set in south OC and back without winding up on a toll road was a bonus. Is that a sign that feature film producing is my next career move? We’ll see. For more info please visit (and like) TRIPLE TIMe on Facebook!